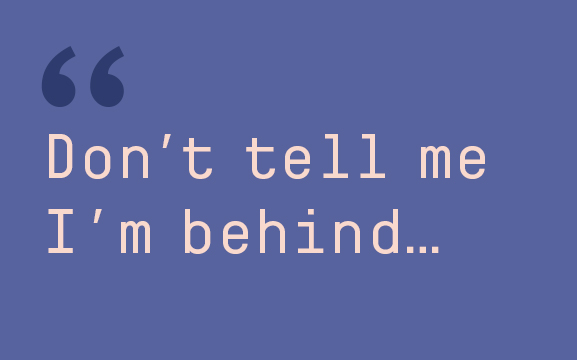 The great catch up debate

There’s a lot of unintentional harm caught up in all the talk about the seven-month learning gap and the urgent need to catch up on the best part of a school year lost to Covid.

You’d think there needs to be a mad dash to bring every child back up to where they’re supposed to be, when the “where children are supposed to be” bar is artificial and has moved significantly over the years. In 2013, then Education Secretary Michael Gove yanked this bar dramatically upwards (by around two years) in terms of what expected learning levels should be. Ever since, a sizeable proportion of our children (between a half and a third at primary school) have been scrambling to catch up with the arbitrary level he set. His policies were panned across the board by heads, teachers and even by the academics he had consulted during his reform process.

You’d also think the pandemic is the cause of the seven-month learning gap between disadvantaged and more privileged children. But as our newly-appointed Recovery Tsar Kevan Collins has just pointed out, this gap is a much longer-term systemic problem; one which has worsened over the last decade and which Covid has only exacerbated. *

More encouraging is the growing call from many quarters (cross-party MPs, industry, education experts, teaching unions, campaign groups) for a big, bold rethink of current education policy. Despite the language of catastrophe bandied about in the recovery debate, as a parent I feel more hopeful than I have since my daughters first started school more than seven years ago that true, deep systemic change may eventually be possible. For them, Covid has meant no SATs, a broken transition between primary and secondary, and a stop-start, masked and bubbled introduction to their new school. At each stage, they and their friends have shown resilience and adaptability, as have their teachers. (By the way,  You Gov research last summer on behalf of campaign group More Than A Score showed that almost no one missed SATs**!)

So far, the focus for rethinking education is fixed firmly on secondary school, GCSEs and A levels. I understand the temptation to see secondary years as the most important, given that they’re the gateway to employment or higher education, or both. But at a recent meeting with headteachers committed to developing a better education system for all our kids, one primary head pointed out that it’s in these first few years that children learn how to read, write, do their maths, socialise and engage with the world around them. Early years and primary are key developmentally and educationally, and they often determine what kind of secondary school learner – tuned in or turned off  – each child becomes.

There’s hope, too, that parents will join the chorus seeking change. Lockdowns, school closures and homeschooling have cracked open the system and given parents a real insight into the excessive rigours of the current curriculum. They’ve now seen the extent to which our kids are being turned into passive recipients of as much knowledge as can be stuffed in to them, rather than active participants in their own learning. And they’ve seen how much time gets wasted on teaching children absurd things (like fronted adverbials) only so that they can be formally tested in them.

If ever there was a case of the tail wagging the dog to the detriment of everyone in the school community, it’s high-stakes testing  – SATs, phonics and the rest  – and the way it dictates precious year upon year of curriculum content. Unlike informal tests done by teachers, these tests don’t help our children’s learning at all. They’re simply the means by which the government collects huge amounts of data on every child and then uses it to rank schools against each other in league tables.

As with everything else, children and schools in deprived communities fare the worst under this punitive regime. Here, parents can’t pay for the additional tutoring that others may feel is necessary to get their young children through SATs. Nor can they pay for all the juicy extras, like dance or drama classes, art workshops or specialist sports that get axed from the curriculum, because so much time is spent cramming in all the material needed to pass these tests.

I believe successive governments have only got away for this long with peddling a primary education system built mainly on what is measurable through SATs and other such tests, because up until now parents have been less involved in what that truly means day to day for their children. Instead they have bought into doing whatever they can to make sure their kids do as well as possible within a deeply flawed system.

Today though, parents en masse are focused on what recovery means for our children. We all want them to go back to school feeling happy to be there, because we know that if they’re happy then they will re-engage properly with learning. We’re also more inclined to place trust in our teachers rather than formal test results to tell us where any gaps in learning might be. And perhaps for the first time, many more parents are also starting to question the basis of a lot of the things our children have to learn, as well as the sheer quantity of information they’re expected to absorb, like so many sponges, in short spaces of time.

So let’s not throw this new understanding away under the runaway wheels of a catch up and learning gaps juggernaut. Instead, let’s build on the trust and respect between parents and teachers, and draw something positive out of this mess.  Let’s truly embrace the fact that emotional well-being forms the bedrock of effective learning and focus on that as the priority, not for the next few weeks, but for the next few decades. Let’s get rid of SATs and all the other statutory tests and replace them with low-intensity alternatives that truly support learning. That will give every child at primary school all the time they need to catch up properly, without the additional stress SATs piles onto young children, parents and teachers.

Yes, our children are resilient. But let’s not test that resilience artificially because we feel trapped in system fixated on only valuing what can be measured. Instead, let’s use the fallout from Covid as an opportunity to work together across political party lines, across industry, across professional bodies and throughout school communities to build a rich, rounded education system that is enjoyed by and delivers good outcomes for all our young children.